The first movie was done really well. It captured the Resident Evil feel in movie form without trying to copy too much from the game. Lots of horror with some action thrown in.

The second movie tried to mix RE:3 characters and events with the original storyline of the first RE movie, making it into a total mess, but not completely unwatchable. It was the ending with Nemesis and the VERY end in the Umbrella lab that were the true rubbish the film offered.

Now, we have a trailer for the 3rd movie, and I can honestly say that I actually will not see this one. Not even as a DVD rental. It looks absolutely awful. From the way it looks, its focusing more on action and milking Milla Jovich's washboard tits than actually having some concievable plot.

First, why are all the world's national landmarks sitting around in the ex-Las Vegas? I'm guessing there's a reason, but it's pointless...like Umbrella holding the world ransom by stealing all the landmarks. Secondly, every single scene in the trailer once it "gets down to business" shows Milla Jovich as Alice being little ms. ass-kicker once again. Only now she's been (spoilers) Wesker-fied thanks to the 2nd movie. Hurray! As if they didn't make her overpowered to begin with... and she's not at all attractive anyway so even watching her all sexed up while killing countless random zombies isn't even fun.

I hear that Claire Redfield and what seems to be Cindy from Resident Evil Outbreak are going to make cameos in this movie, and I can guarantee you 100% that they'll be sitting back, watching Alice do everything, acting like they are helpless little girls when really they kick more ass as we all obviously know. But hey, if the writers want to do like what they did with Jill Valentine and Nemesis in the 2nd movie, then they're more than welcome to shoot themselves in the face for our "viewing pleasure." I wonder how much Milla Jovich had to pay THEM to keep her as the star. I can see the camera shots now....

"CUT! Claire's arm got slightly in the way of Milla's front-left shoulder so we couldn't see it. Redo the scene again. And this time, lets try and keep the camera focused on just Milla this time, ok? This is Resident Evil for god's sake!"

And no. The zombies don't look good in this one either.

I might just watch this movie to watch it, also to see how well they do with Albert Wesker's character, even though his character (last time I checked) was supposed to have a speaking cameo.

Only if they didn't drop George Romero...

Holy shiznat, I totally don't want to see this movie.

I thought the Biohazard movies sucked... The fact that they're further destroying a series I grew up with just puts the icing on the cake. Even from the first game, Sweet Home (an unofficial prequel), had a better movie in the eyes of fans.

I have yet to be impressed by a VG inspired movie.

Definatly gonna watch the third movie.
I'm not picky, I loved the first movie the best, the second wasnt bad either, I enjoyed both.

I thought the first movie wasn't bad, it captured the Resident Evil horror style, the second one wasn't too good though, way too much fancy shooting and action, not much horror. It seems to me that the 3rd movie will be much the same, I will probably watch it, but it I know it won't be as good as the first movie.

It's more of a teaser than a trailer. I remember seeing this in theatres, but I don't really think you can judge an entire movie based on clips where the actual character is only shown for less than 20 seconds in the trailer.

I do hope it doesn't center around Alice. That's part of what bothered me in the second, I wanted to see more of Jill kicking ass =(

The movie franchise is entirely about Alice...

Chakra-X said:
but I don't really think you can judge an entire movie based on clips where the actual character is only shown for less than 20 seconds in the trailer.
Click to expand...

I agree 100% as I follow the same way of thinking, but there are just times when you KNOW something will be done poorly.

I'll say this straight out. Even I can make a better RE movie than this, as I have played each game numerous times and love it enough to give it the justice it deserves. If any of you ever read the ORIGINAL Resident Evil movie script before the writer was replaced with someone else who wrote about Alice, you'd see that the original script was easilly better, as it was very closely based on the Resident Evil 1 storyline, and it seemed to follow it well.

A Resident Evil Outbreak movie would be spectacular as it's one of the few RE games that's both good in story and has a sense of realism to it. Real life people in a real life situation (well...to them at least).

You need hardcore fans of the series to actually make a movie. Not play a game once and write a fanfiction version of it to be made into a movie. Thats exactly what these RE movies are. Fanfictions made into movies.

Sandstorm said:
The movie franchise is entirely about Alice...
Click to expand...

Well yeah I suppose that gives it a reason to be mainly about her, but the second one felt like it didn't COMPLETELY follow her, which is good. Like Logan said, I just don't want the 3rd one to overshadow the other Resident Evil heroes. 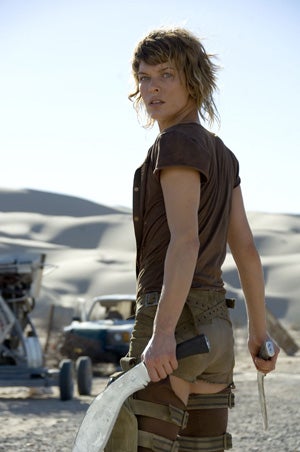 Behold! The only thing about Resident Evil that's remotely important!

fans of the series will be pretty damn happy with a new boss monster that's going to rear its ugly head in the film
Click to expand...

It's Paul Anderson, what do you expect? He butchers every single franchise he gets his hands on, disregards any original plot and tries to make it his own thing. And by his own thing he just gets a hot girl, heavy metal music, and a camera panning around them in circles as they run around doing stupid bull**** with the original game copy in the back of their pants while taking a huge **** all over it. I will admit, the first Resident Evil was mediocre at best.

It would've been half decent if it was its own thing, and not resident evil at all. Apocalypse was nothing but horse**** ( I mean come on, the zombies coming up from the graveyard?)
To this day Silent Hill was the only half decent game movie, and it still sucked ass in most of the plot (but they captured thefeel of silent hill perfectly.)

Paul Anderson will be tried for his crimes one of these days.

If you don't recall, some zombies rose from their graves in Code Veronica... That's right at the beginning of the game...

Why don't you all right a reveiw and send it in to some1 involved with the movie instead of *****ing. Im sorry im not flaming and im sorry if i offended but its just a little boring spending 10 mins reading all your complaints.

You don't have to read them. It's a forum open to discussion and interpretation, just the same.

People are allowed to express their opinions. If you don't have one, you don't care, or you find the thread boring...then feel free to not post or read the thread(s) in question.

That being said Resident Evil is amazingly overrated by today's youth, and the movies are just the same.

MC said:
Looks like we might see a butchered, irrelevent, and completely out-of-place boss battle who Alice fights hand-to-hand and easilly wins in this film based on this quote:
Click to expand...

You left out some key details. :yes:

~*Logan*~ said:
From the way it looks, its focusing more on action and milking Milla Jovich's washboard tits than actually having some concievable plot.
Click to expand...

Well what would you expect since the director is the actress's boyfriend? -__-

Pretty lame, really. I would SO watch it if Jill Valentine was the main character. Deffinitely.

My respects to Milla Jovovich have hit rock bottom as well.

Andy is not amused either!!! ;(
You must log in or register to reply here.