I guess one half of my two most anticipated next-gen gaming consoles-- N-Revolution being the other half, might be Unveiled or Delayed, tomorrow in Tokyo. Alot of people are expecting information, screens, media, ect, but personally, i don't think anything will happen, but you never know. But i still wish they would wait until E3 though.

10:09 Sony is expected to unveil its launch plans for the PlayStation 3 tomorrow - including launch date, price and line-up - as the company finally comes clean, ending months of rumour and speculation over its next-gen machine.

As we reported last week, a big PS3 announcement is in the offing and a PlayStation media briefing as reported on financial site Bloomberg - will be fronted by Sony boss Ken Kutaragi and other assorted bigwigs - has been called in Tokyo for 3.00pm Japanese time on March 15. The father of the PlayStation is expected to reveal the company's plans for its next-gen machine, as well as offering insights into how it will support its PS2 and PSP arms of its business.

Furthermore, there's a wildly speculative 'net rumour doing the rounds, suggesting that a new PlayStation product might be unveiled too. Although wholly unsubstantiated, we suppose it could be the new camera-equipped PSP which has been widely dissected on the internet of late.
Still if our calculations are right, 3pm Tokyo time equates to around 6am tomorrow morning in Great Britainland. Tune into CVG tomorrow to find out if all your big PS3 questions have finally been laid to rest.

Sony poked its head out from behind the curtain long enough to confirm rumors that new PlayStation 3 details will be announced tomorrow at a conference in Tokyo. Ken Kutaragi will address the media, analysts, and publishing partners, in what looks to be Sony's last opportunity to discuss the PS3 before Phil Harrison's GDC keynote. GameIndustry.biz speculates that the event will include information about the pricing, launch date and initial software line-up. Plans to officially unveil screenshots for a PS3 version of Untold Legends have already been revealed (note: the images were leaked last week).

And Lets not forget, a blast from the past, before getting over excited about anything.

Ill probably be playing Red Orchestra on my PC. Not that I wont be happy for all you Sony heads, but things can only be hyped so much before I stop caring.

I'll be at home, playing a number of games on my PC. Should I have chinese food tonight?

I'm not much of a console fan anymore, but I'm still pretty interested. If its as good as they say, I'll probably buy one.

Should I have chinese food tonight?
Click to expand...

i'll be on my comp

Thanks for telling us. If you people aren't interested, why do you even bother posting?

I'll be rushing with a TMP, deagle and a HE nade on Office in CS:S

@Zeo: Because they are expressing their opinion. People saying that they'll be on their computer is their way of saying that they aren't going to be jumping up and down in anticipation.

I'll probably be still asleep as I'm in Great "Britainland". Not that anything from Sony is something to be exited about anyway.

Thios thread was obviously made with a Sony advocate's excitement in mind. Zeonix is right--if you're only posting to say who cares, or indirectly slam something, don't post.

I expect that Sony will drop the BluRay functionality from the machine, introducing it with DVD only. There is no other way they can make launch dates without it, and that means if BluRay is still in, you won't be seeing it in your home untill 2007 (North America).

Still, I intend to buy one so long as DRM doesn't cripple it to the point where I pop in my 1st gen game and get a warning that my analog connection may support piracy, and that I'll have to upgrade to a $10,000 TV.

Well I'm interested in this, I really would like a solid release date instead of this whishy-washy rumor-filled bs =/. And this console better not surpass $500, let's not get carried away Sony. And to my knowledge, the PS3 is going to be more powerful that the 360, so I hope the game developers excellently show that.

Man I hope it's released sometime this year..

@ Zeonix - Because he asked "Where will you be?"

It says "Any thoughts?".

The Sony guy has said it will be 'expensive', so my guess is that $500 is a little low.

I'll be expecting a detailed explanation on what went on from you Soul Punisher =X
Click to expand...

^_^ lol..That's perfectly fine and understandable Chaky, but i strongly suggest you keep your expectations low. I tend to disappoint rather easily.

But getting back on topic... There was alot of delaying news going around yesterday following the Tokyo news, confirming that the PS3 has officially been delayed and is scheduled for a Winter release in Japan, meaning it would come over here in 2007, like Cucumba already pointed out. But that could all be false and i guess we will find out later on today. Now as tempting as a spring or fall release would be, i really do hope Sony goes with that long delay, hopefully making its way around the U.S. around that time exactly. That should allow the price of materials to go down so it will be competitive with the other pieces of hardware, which will make it alot easier on consumers as well.

As far was what might/could cause the delay, I don't necessarily believe Sony is having any problems with the BlueRay's technology like alot of people believe. But I really do think they might just have some cost control issues with it. I think over the last year or so Sony hasn't been able to find a way to produce the technology cheaply enough and they know if they release the console at or over $500 they could more or less, possibly kiss their tight grip on the market goodbye.

I think that a good chunk of Sony's future might rely on having the PS3 dominate the market again. If that happens, BlueRay-DVD players will be all over the place, and the format will be available in every home. Sony will make more money off of the BlueRay's format royalties than they will from the games. Anyways, i just found the first in-game PS3 screenshots from the game that was leaked called Untold Legends-- unless i missed any other games that showed any. This might be old to some, but it was new too me.

Untold Legends: Dark Kingdom RevealedSOE's Action/RPG franchise comes to the console.by Jeff Haynes
March 14, 2006 - Recently, Sony Online Entertainment had a Pre-E3 press event where they showed off their upcoming lineup of titles. Not only did it serve as an easy way to check out the titles away from the hustle and bustle of the show floor, it was a great chance to see how some of their other franchises were progressing. It also served as a venue to unveil a secret project that SOE has been working on for the PS3 launch window. 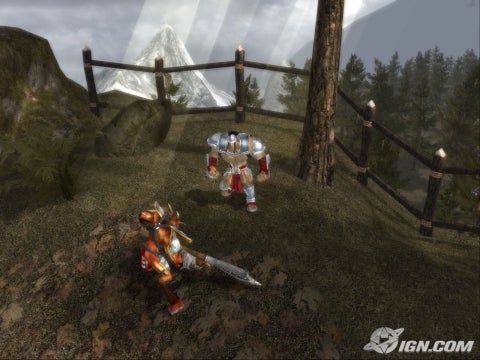 They also wanted to build a game that fully took advantage of the Cell processor. To that end, they created a new system from the ground up and made sure they implemented a lot of eye-catching features, such as realistic, fully interactive water. There are also plenty of particle effects and Havok powered real-time physics, including rigid body and rag doll physics, to enable interactivity between the player, the environment and any objects they'd be able to come into contact with. For example, you'll be able to pick up and launch an enemy into a group of their allies, scattering them all with the force of the impact.

Andy also alluded to players using the environment to help them dispatch bosses in key battles. "We wanted to leverage the processing power of the PS3, which up until now hasn't been offered on any platform, and integrate features like real-time physics, particle effects and post-rendering effects -- things that up until now have only been capable on highest end PCs." Even more, he talked about a couple of the different ways that the power of the PS3 was being utilized during the game. For instance, he stated that the physics system of the game might be handled by one processor, the calculations behind the interactive water would be handled by another and the audio running on a third. The same could be said for the particle system, which will probably run on its own processor. The ability of the PS3 to handle all of these tasks due to its multiple core design is one of the reasons that Andy, and his team, are excited to program Dark Kingdom. "I started out working on PlayStation games. I ended up going to PC games, online pc, specifically, and this is the first time that I've really wanted to get back into console games, because now we're capable of doing things that haven't been possible on a console before." 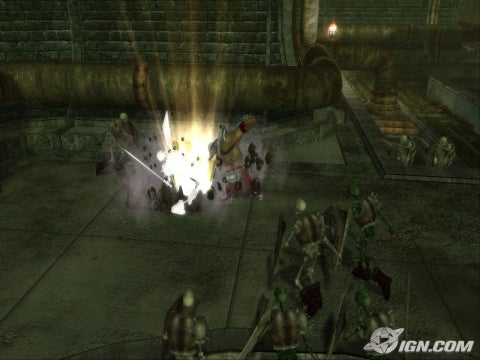 Unlike the other two titles in the Untold Legends series, Dark Kingdom is a much more revenge oriented game. Penned by Keith Baker, the creator of the D&D Eberron series, and set in the Untold Legends universe, the plot of Dark Kingdom involves dethroning a corrupt king and saving the land as the primary mission for the player. As part of an elite military group, the player was initially deployed by the king to suppress uprisings and regional discontent. However, as you return from your mission, you start to discover a more insidious plot, including the appearance of mysterious creatures, the disappearance of townsfolk and the implication that the king has a hand in everything that's happening.

^^ When viewed closer, i think it actually looks pretty good myself. I hope they show some videos of it later today.

If it means punkass brats won't be able to go on Bit Torrent and swipe the games, I'm all for it.
You must log in or register to reply here.