Just started watching DBS after I read up a bit on the manga which has quite the pacing. Kind of like the series, thus far - I am currently at episode 20 which is the beginning of the Resurrection of F movie.
Can anyone give me a rundown on the timeline for DBS the series, the movies and the manga? Feeling a bit chaotic.

Nonetheless - started watching quite a while back but dropped it quickly due to the fight between Beerus and Goku on Kaio's planet. That shit reminded me too much of the fight between Naruto and Pain, horrid animation.
Still cringe when I see a few scenes but it is not as bad as it was. Liking the "casualness" of the cast and there were a few moments that made me chuckle. Wish they would be a bit more careful with the portrayal of Vegeta.

What are your thoughts?

Well...the anime has overtaken the manga so far which i prefer. Im currently updated with the episodes and waiting for today's episode to be translated

In the beginning the Anime really lacked good animations for fight scenes, (strict deadlines maybe?) but they have remastered some episodes where the animation was poor and haven't done too bad of a job. The movie "Battle of Gods" is basically the first Arc of DBS. Then Revival of F is the second Arc.

After that is the Universal Tournament Arc, the battle between Universe 6 and 7 where the Super dragonballs are the prize.

Totally agree with you on the PG and liking the script. Also, appreciate the rundown - was actually unaware that the anime was further ahead than the manga - guess I will have to catch up to avoid spoilers in this thread moving forward. I actually liked the fight between Goku and Beerus when Goku was SSG in the series, the design is still a bit weird for me.

What do you guys feel about some of the retconning/loop holes etc? I mean seriously, Gohan and Piccolo struggling with Tagoma/Ginyu? Piccolo had imperfect Cell by the balls and Gohan was *****slapping Super Buu. Your power level cannot decrease over time just by not being actively training, or can it?

Lol, its hard to pinpoint what the powerlevel of Tagoma actually is. He definately had a major boost when he was being used as Freiza's training partner for months. I would say he is somewhat on perfect cell level maybe?

Its also hard to say whether or not piccolo still trains. Hes probably as strong as semi-perfect cell

I remember the Majin buu saga when gohan was fighting dabura. Vegeta stated that gohan had lost his battle sense and isnt as strong as he used to be when he fought cell as a kid in his SSJ2 form. He was studying instead of fighting, so in turn i believe its true that your powerlevel can decrease over a time of inactivity, goku also mentioned in super that he was desperate to go and train due to the fact he was feeling rusty

I dont think gohan has access to his mystic form anymore, which he used to fight super buu
Last edited: May 15, 2016

I watched it day 1 and been just fast checking it since them because there hasnt been anything interesting in it at all.
The animation ( even excluding that horrible episode ) is ugly and the characters look like generic not-so-buffed anime characters that dont fit DB, i thought they were going to use something like dragon ball kai for it but i guess not..
The fights are boring, the new characters are boring, the old characters are dumber, the new transformations are bad and i really hate the fact that stupid cat and his gay friend are always with the group now, its like a sitcom minus the laughing, not even frieza arc felt that "menacing".
It lacks the tension moments the old dragon ball had plus the fighting, i really reallyy hope that in the next promissing arc with future trunks and all that tension and epic battles make a return and im cheering for the next evil dude to straight up murder some of those comic relief gods cause its getting annoying.
Last edited: May 15, 2016

lol by introducing this future arc it means we can see all the future gods now even better! haha 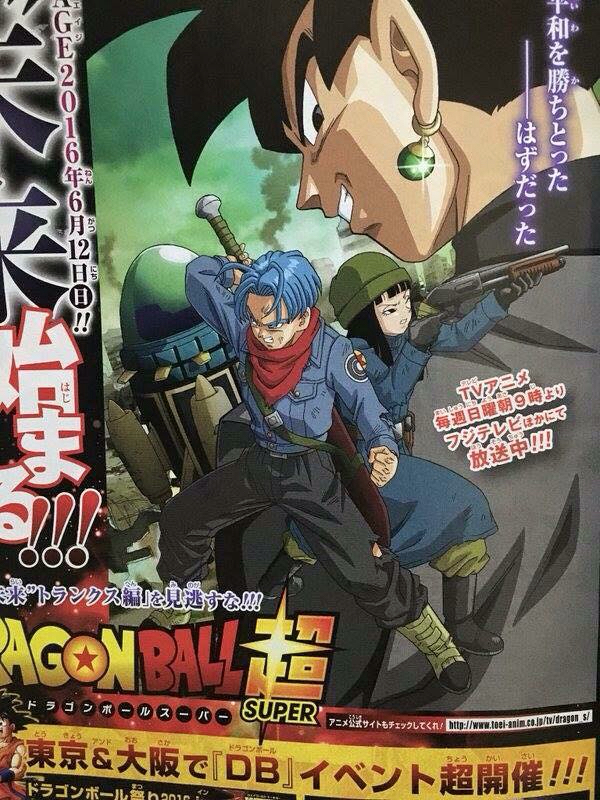 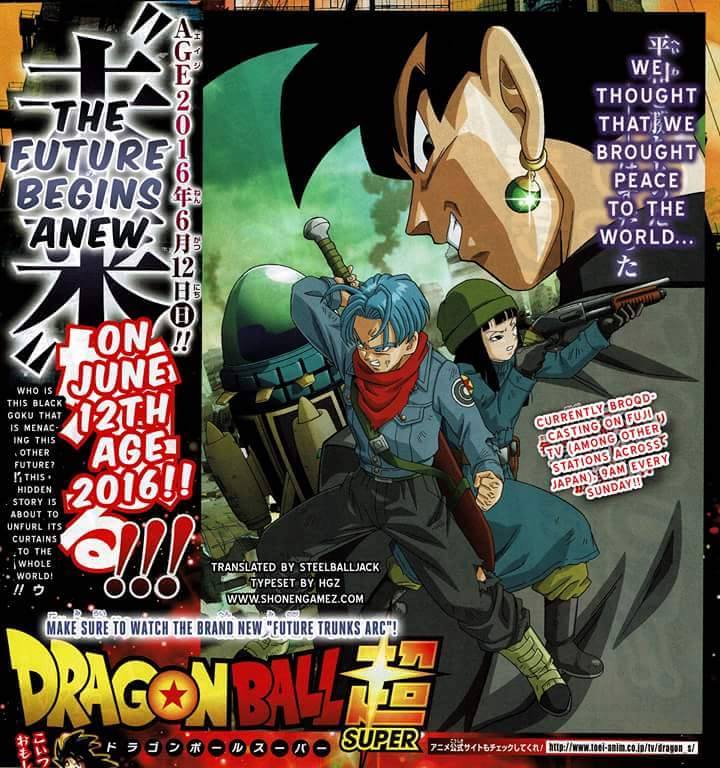 What the hell :yes:

lol im not impressed by the scan at all.. unless that sword is special/magical/unbreakable i don't see the point in even having a sword in DBZ/DBS or a human with a gun for that matter. CoreAlex said:
or a human with a gun for that matter.
Click to expand...

Darth Revan said:
trunks could of taught her how to enhance her bullets with ki manipulation
Click to expand...

This is Dragonball, not One Piece. Ki/=Haki

Grega said:
This is Dragonball, not One Piece. Ki/=Haki
Click to expand...

IIRC, in some guidebook there's an entry about Trunks' sword which claims it's a just a high quality sword that's even able to cut Freeza, and nothing about it being enhanced with ki. You'd think that if weapon ki enhancement was possible, it would've already been done by someone throughout the series.
Then, we have DB Online where weapon enhancing with ki is possible (though supposedly it's a new thing, unknown before), and Toriyama supposedly was involved in writing its story.
So... weapon ki enhancement is possible I suppose.

Anyway, knowing me, I should dislike DBS. For all the inconsistencies and out of character shit, for randomly introducing super strong villains out of nowhere, etc. But I don't. I somehow like it. Toriyama (or what Toei did with whatever Toriyama gave them) still manages to deliver interesting plot and characters.

Did you guys know the creator of Dragon Ball AF is involved in making the official manga of DB Super, he works now together with toriyama,
his name is toyble, but goes as Toyotarō these days... here are some sources i found about it:

also here where you can see it in the manga, left dbaf, right db super: Toyble/Toyotaro is not the creator of AF, he just drew one of the thousands AF fanmangas. Either way, don't ever use DB Wikia as source, it's ran by fanboy kids to whom their opinion = fact. Use Kanzenshuu instead.

Toriyama tells him what the story is and he gets to draw the story. When hes done, Toriyama goes over his work and changes what ever he sees fit.

hleV said:
Anyway, knowing me, I should dislike DBS. For all the inconsistencies and out of character shit, for randomly introducing super strong villains out of nowhere, etc. But I don't. I somehow like it. Toriyama (or what Toei did with whatever Toriyama gave them) still manages to deliver interesting plot and characters.
Click to expand...

I agree with the introduction of super strong villains, I mean, surely you'd have heard of God of Destruction some time if he existed back when we watched Dragon Ball.

As for wiki and opinion != fact, you can always look up the source.

Lots of inconsistencies. Can't be bothered to list/remember them now, but they include the whole god forms and how they work with already existing forms, Vegeta's rage boost vs Beerus, Boo getting knocked unconscious (can't be done because his every cell can act on its own), Freeza becoming god-tier because he tried out this thing called training, Freeza's henchman shooting down Gohan with some ring, Gohan turning SS (debatable matter according to many, but not according to me because I follow manga and what's exactly said there), see, I said I wouldn't list them! In fact the whole DB ending with Oob is inconsistent with DBS because Goku honestly said Oob might actually win the tournament. Oh and... Trunks' hair color.
Vegeta's out of character, I think Piccolo's too.

Then again we can never be sure what part actually comes from Toriyama and what's merely Toei's addition/alteration.
Last edited: Jul 15, 2016

I agree with the introduction of super strong villains, I mean, surely you'd have heard of God of Destruction some time if he existed back when we watched Dragon Ball.

As for wiki and opinion != fact, you can always look up the source.
Click to expand...

Piccolo is out of character! lol.. Got mad skills gardening though.

What are the odds of Black Goku being Goten? I know that Trunks is older than him but he should have still been born in that timeline, right?
Last edited by a moderator: Jul 22, 2016
You must log in or register to reply here.