I saw something like this on the GameFAQ's forum - didn't want to clog up the other thread with (possibly false) hopes so here goes, post everything you want to see in Tenkaichi 2.

Characters/Forms/Classes: Assuming all the previous Tenkaichi's characters will be present:

What are the differences between those?

at least three unique attacks per character. If i MUST be a generic looking attack, at least make the pose/sprite/damage/speed/homming different.

Each melee-oriented special must look different.

The abiltiy to de-trans at will

More health bars (or at least an option for one)

Beams don't explode on you, they carry you first

Giant maps or one big world. A Dbz world like GTA is but you have certain destinations. Kind of like Buu's fury for the GBA but instead of having a sign to go to that you use to enter fly mode you can fly any time like in ESF and as high as you want and kill bad civilians with energy blasts or blow up Hercule.

one of the most important things imo is they should change the beams, when you do the move i dont think it shud be just instant with a set damage, i think the damage should start low, but if you hold in the buttons you'll charge more into the attack making it more powerful... Without being able to charge up beams, it just makes the beams way too powerful.

What are the differences between those?
Click to expand...

Sorry I should've made that clearer, '100%' is the transformation he goes through as a demonstration to Future Trunks (similar to Frieza's - gigantic shoulders - hence the name):

'Power-Weighted' is the transformation he goes through vs. SSJ2 Teen Gohan where everything gets ridiculously huge (and his jaw goes all square :O). Budokai 1 had it which is where the name came from:

Perfect Cell Perfect Form is the Tenkaichi name for 'Super Perfect Cell', the form he regenerates back into after blowing up (lightning in the aura):

@Davidskiwan - Chargeable beams would be a great addition imo, but it seems the only DBZ game thats cottoned on to that is...ESF.

Features:
1. Better camera [BT 1's camera was ok but it could improve]
2. Charged beam attack [Could be nice, from the reasons David stated]
3. Better A.I [The COM is just dumb to play with, doesnt do much then spamming energy blasts]
4. Better teleporting [Sometimes it's IMPOSSIBLE to teleport away from a blast, surley you all noticed]
5. More eye-candy [I just love eye-candy]

What the hell are 4d?

what the hell is false super saiyan goku, and show me some screens of ss4 kid goku and ss3 kid goku :O :O

Actually I think he goes SSJ3 for like 5 minutes and when he goes SSJ4 he becomes an adult again.

If you guys are talking about the GT Goku...
Then shut up...XD
j/k XD

False Super Saiyan?...well in movie 4 if im not mistaken, against Lord Slug, Goku transformed into a Super Saiyan but it wasnt in it's full state (he had Super Saiyan aura, his hair rised but stayed black...etc...) I think thats what he means, and I'm not sure if we'll see any of that in BT2 D:

first version was for me really nice, yet a lot of things could be improved. Which are:

-Camera work
Would be a lot better if they changed the camera a bit. I couldn't even see my own moves on screen when you were close to rocks, objects, etc. Which was and still is really lame. And it would be also good if they remove the target search system, that it targets automatic right away.

-Transformations
As they already said. Instant transformations in-game, which is really the best and i know a lot of people are demanding this. This feature, i love the most.

-Improved beams & blocks / struggles
The beams could be improved a lot. I want it to be like ESF, to charge without a "screen" that you see he / she / it is charging a beam and or attack.

Also the block can be improved so you can block struggle, and actually put power in to your block to push the beam back, or fire the beam / attack back to your opponent.

And the beam struggle? Turning like crazy on your joystick is nuts. It should be able to push power in to the beam, and stamina system perhaps. Just, a lot of things has to be improved in the game. The game's fine, but they seem to be easy with the stuff they put in. Like, simple things and they leave it like that.

ZeroNightmare said:
what the hell is false super saiyan goku, and show me some screens of ss4 kid goku and ss3 kid goku :O :O
Click to expand... 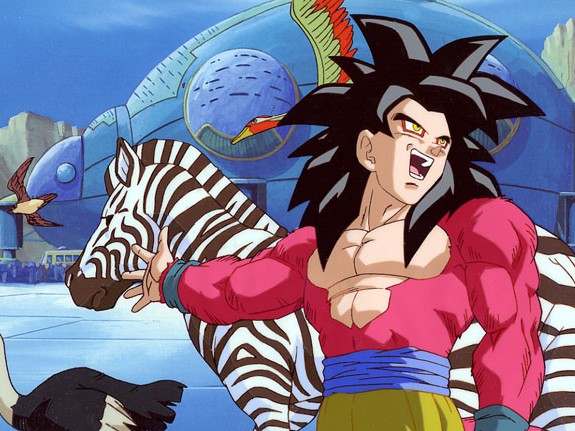 It might seem a bit excessive, but if they're including Lord Slug then they need False SSJ Goku in there for his movie's story arc.

kid goku's already in there:

I prettymuch agree with what skyrider said, but you know you could pump more power into the beam by holding L1? it drains your ki though and makes u stop and breath heavily for quite a while.

Heh yeah. Also, I wonder why they circled '4D' in the pic you posted?

Heh ^^ someone circled it cause he thought it says '4D' but it's actually says 'Transformation D' feature.

You have your characters and attacks. Online mode anyone?
You must log in or register to reply here.