Im totally serious about this thread. I was thinking that either it could be implied to the normal game or that it could be a game mod like the Dragon Balls are. This could only work in a team battle.

How it would go: So I was thinking that in the game the characters could be fighting around and stuff and you could be working up your ki to gain the ability to produce a fake moon like Vegeta did in the early episodes of DBZ. Mind you this still needs to be worked out. Help is appreciated. 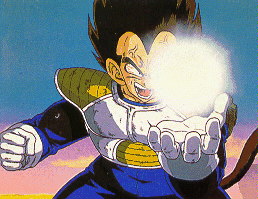 If you remeber correctly he make this energy ball then shot it in the sky and became the Oozaru form.

About the Oozaru form: What i was thinking was that you had a 40/60 chance of having control over the Oozaru form. When you woudl want to change all you would have to do is look at the fake moon and then a serious of buttons would come up. You must push the direction buttons in the time that it allows. Mind you to keep it fair, you would have to push 10 arrows in 2 seconds (time can be worked out). Also if you take too long the arrows become random directions like we have now in melee. If you successfully pull this off then you have a set amount of new moves.
1. Mouth Blast: If you remember this, Vegeta and Gohan both did this in Oozaru form.
2. Generic Blast
3. Signature Move: This depends on the sayian you use.
4. Grab: You grab the character and begin to squeeze them. This would be considered a power stuggle and the Oozaru could lose. 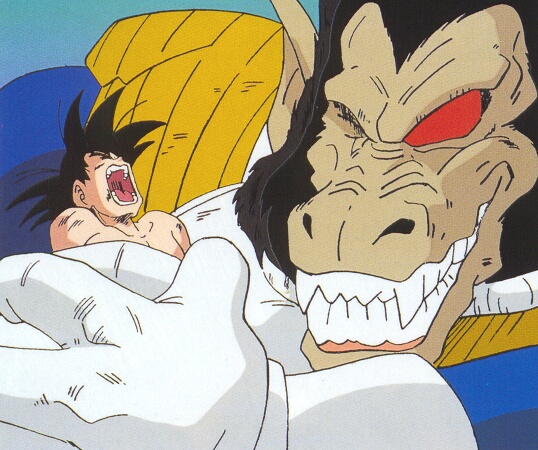 Now say you mess up on the arrows, well now you have lost control of your character and either start to hurt your fellow companions or the other team members.for a set amount of time or until you die. Mind you the fake moon does not stay up for that long. 3 minutes at the most and it can also be destoryed.

If this was in the actually game and not as a mod then the character would gain an extra 20 points in speed and in health.
Example:
Vegeta : Speed 200, Health 100
Oozaru: Speed 220, Health 120

Edit: Also the height of the character would be bigger then 2nd FOrm Frieza but to keep it fair, it would be only 15 feet bigger.

I can't think of anything else to add. Im open for new ideas, totally reconstructing this idea or adding more to this. Thanks for your time.

None of the Saiyans have their tails.

I don't like this, I have never liked the idea of having an Oozaru in ESF.

To start, the arrows appear just by looking at the fake moon? How about, make it an attack slot that you can only use when a fake moon is present? Otherwise people could accidentally look at it when they don't want to change.

And with this most people would be picking Saiyans, so to help out the other characters you could have Piccolo's growth in it so not everyone is utterly screwed by the Saiyans. And before anyone says that Piccolo didn't use growth in DBZ, as far as I remember he grew a bit in the Garlic Jr Mini Saga, after Garlic buffed up I think Piccolo grew a bit to match size. Since Piccolo doesn't need the fake moon perhaps his attack slot is only usable when there is an Oozaru in the server.

(Ugh......I don't like any of my suggestion as Oozaru/Growth would suck)

How big would the Oozaru be because if every Saiyan on the server could do it from one fake moon then it could get quite cramped.

Too unbalanced
You must log in or register to reply here.