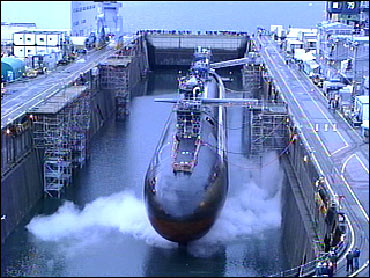 One Trident nuclear ballistic missile submarine carries the power of 5,000 bombs like the one that destroyed Hiroshima.


if only i could put that in my pocket

Dakilla and they will change from Sword to Kamehemaha and KI SHIELD.
:laff:

If I had a weapon,it would be a katana-gun combo,now thats for skilled people!!actually no that's just for the strong people,but at least I know how make swords from scratch....philippine tradition....

and if you ever wondered,I could make you guys some paper ninja stars to dish it out shinobi style but sadly none of you live in Hong Kong

But if I had to choose something real good,then a nuclear power plant is my type of weapon mwahahah! Make it explode and cause a radiation crisis....now that can only be defeated by....****roaches!!mwahaha!

How bout a gun that shoots katanas lol.

Why must there be so much violence in the world.....

*thinks about what he jsut said*

Fuhget that. I would have a:
Barret M82A1

I would use Vash The Stampede Gun that gun OWNZ!

Originally posted by GoldSaiyan
Either you have a high fantasy of guns or played with a aimbot with CStrike.
Hitting targets that is "SUPER" fast and moving in dark is easy to hit? Yeah sure it is, if you're the matrix.

Ninja's are trained to kill people with the sword and they know how to use it and they know how to exploit the gun's weakness.
100 Ninja's vs 50 Gunmen in a open area = Gunmen wins
100 Ninja's vs 50 Gunmen in a dark area, or forest or whatever. = Swordmen wins.
Besides, Swords is always the most deadliest in close range. Why?
Because one stab is enough to make you flood the ground with blood and one slice is enough to decapitate your limbs or organs.

And not all shots do kill you know.

9 year old, isn't that your age with having a overbloated mind, not to mention the ignorance of one?
Guns were soooo effective, people in WW2 died by a bayonet stab that is ATTACHED to the gun.
Wow, your logic makes sense.

If you go to Japan, carry a chaingun for christ sake I don't care.
You'll get killed by a Ninja in no time, if you get problems with the Mafia there.
Click to expand...

Man this guy is wise !!! See !! guns are for cowards that are scared and just use a gun and shoot but kill a ninja with a gun on the street is impossible you wouldnt even notice they will be behind you and slice you off and you can kiss this world good bye...

What would happen if you fire a AW/M right in someone's face in close range.
That'd be a show.


You always see nice holes in people's skull when they get hit by a bullet in the head.
But in close range, depending on what ammo is used on the guy.
The whole skull may explode in half, or where the bullet exits, the shards comes right from the head like a paper bag.

Originally posted by Jaredster
How bout a gun that shoots katanas lol.
Click to expand...

Or a katana that shoots bullets :laff:


You get my idea.

bullets that shoot bullets....woot you been playing around with your shotty?!

anyways yes killing a person with a gun is hard if youve never held one,and swords and katanas....I just go around thinking of them as pencils

By the way, the gauss gun "DOES" exist, but not in the way of Half-Life.
It uses electro magnetic pulses or whatever and can shoot projectiles at extreme speed.
1 mile per second even more.

Hey pencils are not so bad is better than guns violence doesnt take you to nowhere but whats my favorite weapon on my favorite action games are always the pistols and on Everquest the swords and my Wizard's Sticks. ^_^

I'd have to say for me the 1 weapon i wanted to learn was "The Sais" if i spelt that right or "Numchaucks" haha i know i didn't spell that one right but you get the idea
You must log in or register to reply here.