Just wondering if it's possible to implement a type of effect for after the character actually reaches its transformed state, like a damaging push-back effect that could possibly look like this 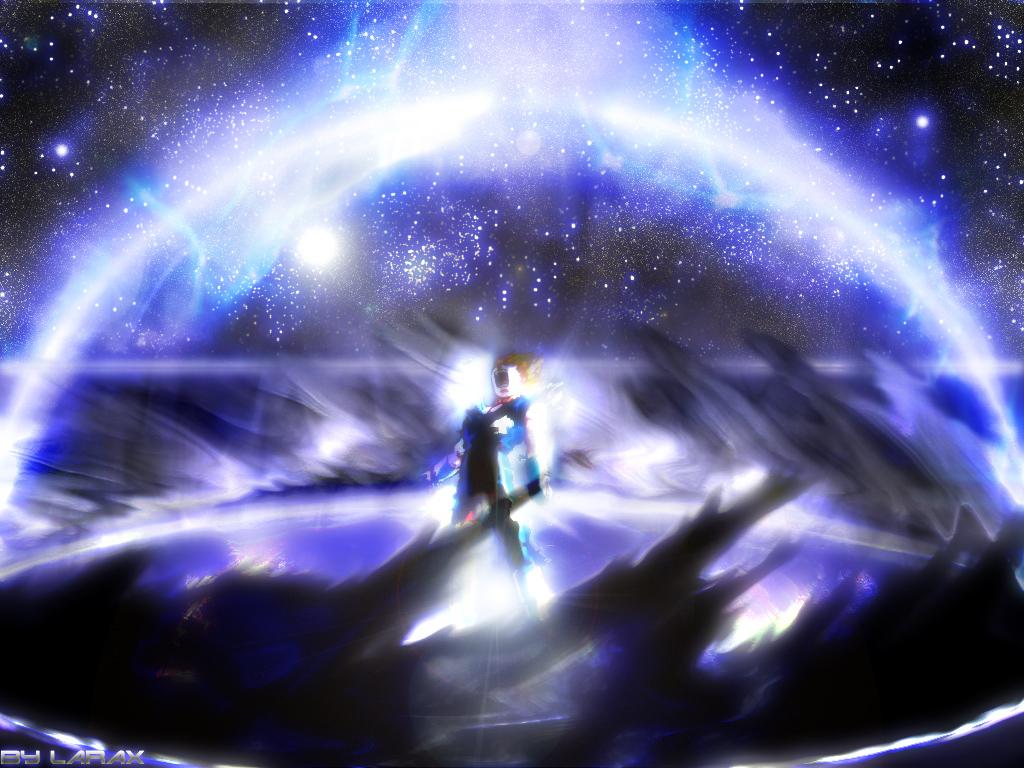 Also, why not attempt to make it harder for people to be able to swoop in and attack a transforming character, like when goku was transforming into a ssj3, or when he was reaching full power super saiyan, have a pushback effect on the character or something, of course the level of power scaling, only affects people of a certain level of strength.

Let's say, it would only really look "pretty" to someone with a power level fairly close to that of the person transforming, but the level of effect scales to those lower in power to where they can't even approach at all.

Just a thought, seems it would make it a bit interesting instead of just letting everyone easily gank the person who's transforming
Last edited: Mar 7, 2011

Only to those who are close enough, like when the transformation finishes it pushes much weaker characters back and flings em into the ground/walls etc. Like I said, it will only affect people considerably weaker to that extent. If goku were to go ssj3 next to buu, he'd only get pushed back maybe about 10 feet at the most and not just flung like he got round-house kicked in the face


Also, that'd be if buu were standing still and not making an advance, but cell advancing on goku ssj3 would be a bit more difficult. I'm thinking like a vacuum effect type of thing with people being anywhere from unaffected to being pushed away.

Somewhat like when charging ki up in 1.2.3 and then hitting the block button, there's a push-back effect and eventually it stops working if the person has power considerable to the push-back-er lol

I'm just thinking up to a level of where if goku went ssj next to krillin, there are chances krillin could get flung away when the transformation reaches its peak and smack into a wall if there's one in the direction he's flying, but not considerable damage by any means.


Maybe even just pulsing effects like the charge/pushback technique in 1.2.3, to where it won't slam a much smaller PL character away, but just push them slightly away, while not entirely making that person invincible to spam like in 1.2.3, but just enough as a small defence mechanism. Or have it to where the transforming character can continually pulse at their own whim at the cost of life or energy.
Last edited: Mar 7, 2011

Even if this were done with no damage, it would still be pretty bad.
Imagine a server where people keep transforming again and again, seriously, WTF would happen to all the fighting? It would be a goddamn pinball game without the score.
Plus it can be abused to hell and back to avoid attacks.
Just my 2 cents :C

It wouldn't be a pinball game necessarily, as someone near the strength of the person transforming would be unaffected or only slightly affected but still able to get passed the outted energy level, and only a considerably weak attack be able to be pushed back. If it were to avoid an attack that would be so much weaker, the person would simply be able to block and deflect the energy attack fairly easily

I mean, I'm not talking about anything major, not really exactly like the energy charging skill used in 1.2.3, just using that as a reference as to what could happen, but by all means not invincible. Just like when goku was charging up to full power SSJ at the cell games, only people considerably weaker would be blown away, while the stronger the person the less dire the effects would be, just slightly slowing the person's movement speed to the person transforming.
Last edited: Mar 7, 2011

If i am interpreting that right, then that would be troublesome for people who join a server later on, since their power level wouldn't be as high as those already in.
A way to solve that may be to limit how quickly you can ascend and descend, by keeping a time limit between transformations or something.
Like: Transform > Need to wait a certain amount of time > Descend > Wait again > Transform
Haven't really got any other ideas :C

Yeah I see where it would be troublesome, totally. I'm thinking just like a giant gust of wind type of push-back if you know what I mean ;P Ki attacks don't count with being pushed back, maybe slightly slowed down

The idea to only affect weaker people is silly. That would punish the late joiners even more than the PL difference already does.

The idea of full immunity for transformations is equally bad due to transform spamming. Solving it with timers doesnt work, as it makes the game unnatural to the players perspective.

We came up with 2 possible solutions for this:

Now i have no idea what the final word will be on this. It could be one of the 2 above systems or something totally new. But you can be sure that we will not be including any timers or similar.

I say you should be warped to another dimension to transform.

nemesis2290 said:
Or have it to where the transforming character can continually pulse at their own whim at the cost of life or energy.
Click to expand...

I think this could be a pretty good idea! When u transform u could have a certain bar of some sorts appear or something like 3 charges for a barrier or alternatively activate the barrier at the cost of either Life/PL/Stam/Ki or a combination of 2 of these. So lets say u start transforming and somebody shoots a beam at u or tries to melee u. U press a button and a barrier protects u from all attacks for about 1 sec at the cost of 1 of those charges given or Life/Ki/PL or Stamina. Therefore theres plenty of chances to still be stopped when transforming but also gives u a fighting chance while also having some drawbacks when transforming.

I was thinking since there's melee bonus points why not add in ki bonus points? you can use them to shoot a fully charged beam instantly instead of charging it up for however long you usually do, or when transforming you can use it to send out a pulse of energy to deflect a ki attack or pushback someone rushing into you. Also being able to be used to knock back enemies that are continuously pounding on you so you can catch your breath and recover.

And just like melee points, to obtain them you'd have to use your energy attacks and get kills to get a point for a maximum of 3 at any given time.

the ki knock back ability takes 2 points, the fully charged beam takes 1 point depending on the attack, like generic beam 1, kameha 2, and spirit bomb 3 points, and the transformation knockback ability taking at least 3, so people can't abuse it and can only use it once if they try to transform, but only being able to cancel the transformation after 40% of the total time it takes that person to transform is up.

There is no such thing as melee bonus points.

Its just that you only saw the melee use for the bonus system so far. There is much more behind that.

None the less Grega, his idea sounds pretty well in matter of gameplay. Being able to counter countermeasures would prevent the attacker to be hunting sitting ducks and instead lets them think about the potential danger in closing in.

Reptile said:
None the less Grega, his idea sounds pretty well in matter of gameplay. Being able to counter countermeasures would prevent the attacker to be hunting sitting ducks and instead lets them think about the potential danger in closing in.
Click to expand...

Counter question. When do you transform most of the time?

Anwser: Right after you respawn.

Problem: You have 0 bonus points when you respawn. When you die you loose them all. Meaning you would have to fight first, then when you are beaten up by the people who are transformed and have enough bonus points to last you through the transformation, you transform. You are then left with little to no bonus points, not at max health, while the people who didnt die have more BPs and can off you before you have the chance to gather more BPs.

i think this round goes to Grega

True, i didnt take the time when people transform into account. Well done pointing that out.

What round went where? and since when was this competitive?

i mean grega hit back with a knowlage BOMB

Ah, well it sounded like a feasible idea to start, but apparently my lack of knowledge of the final game smacked me in the face xD Thanks for the feedback guys, and thanks Grega for clearing up a lot of issues and what not

Grega said:
The idea to only affect weaker people is silly. That would punish the late joiners even more than the PL difference already does.

The idea of full immunity for transformations is equally bad due to transform spamming. Solving it with timers doesnt work, as it makes the game unnatural to the players perspective.

We came up with 2 possible solutions for this:

Now i have no idea what the final word will be on this. It could be one of the 2 above systems or something totally new. But you can be sure that we will not be including any timers or similar.
Click to expand...

why not use both? first transformation complete immunity ... and then every transformation after that you have the 2 -3 second rule. and to have some immunity after the transformation is important too ... a lot of ppl just sit and wait n time a destructo disc at the right time. characters are usually extra beefed up and invulnerable usually right after a transformation anyways ... maybe just take super reduced damage during transformation instead of total immunity.

or maybe complete immunity for the first time transforming with each new life ... and then no more after that. (that way it cant be spammed, you'd have to die just to get immunity back again)
Last edited: Mar 23, 2011

And then there were none.

It seems that the people on this website are the kind that wouldn't just wait until a transformation is finished and use a DD. You all see pretty fair players. Immunity during 1st trasformation is a reasonable perk. Perhaps the addition of a knockback effect and with damage reduction during trasformations above the first, balance could be reached. I don't know if a point system is a necessary implement for this ability however, because it might become op'd by bonus point spammers. That's my point of view.
You must log in or register to reply here.