The Latest from GTA IV

Well, the fourth and final trailer is set to hit next week, March 27th to be exact. In the mean time, a bunch of new media just hit IGN today. And all I can say is that if the following image is 100% in-game, and not touched up, I just crapped myself. I can't say I have ever seen smoke look that good in a game before. 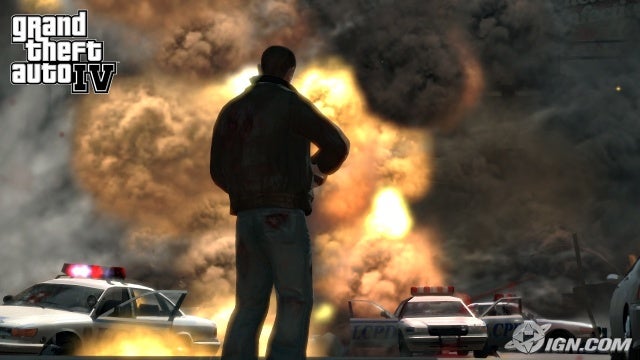 Hands down the best explosion I have ever seen.

I dunno the Crysis explosions are pretty bad ass.

Same with the CoD4 explosions/puffs of smoke.

Enix said:
Same with the CoD4 explosions/puffs of smoke.

isnt the 360 version supposed to actually have better graphics?, and errr, downloadable content?

I'm pretty sure the PS3 and 360 versions will have identical graphics.

PS3 users will be mad pissed off if they get such a gimped flagship title for their system.

GTA has always been meant for PlayStation (and PC), so it wouldn't make sense for them to gimp it in any way.

The idea behind the 360 having better graphics for GTA was based on the fact that the PS3 has got a lot of bung ports of games. Oblivion, Orange Box, etc... But, Rockstar has said that both games are identical, and neither are ports. There are two separate teams working on each build of the game independent of each other. So it's not like they're just focusing on one build, and then porting it to the other console.

no i mean there have already been comparison screenshots posted around the net, i think maybe even in a magazine somewhere.

now some may have been early shots and whatnot, compared to newer ones, i guess that remains to be seen, but the 360 version had much better lighting and anti-aliasing than the ps3 version in the ones shown, past crossplatform games also imply that it will have a smoother frame rate as well, but that is just speculation, (dmc3 anyone?)

and about the dlc, supposedly microsoft paid rockstar (or whoever it is) to ensure it would be exclusive to 360, is it true? i have no idea, but ive heard it from more than one person.


im getting the 360 version myself, even if the graphics are identical, i like the controller more =).

Most recent reports are that AA is better on PS3, but the colour is more vibrant on the 360.

Same date as the PS3

For once, I wish the PS3 would get a one-up over the other console(s) when it comes to multi-platform. I'm not a Sony-fanboy, but GTA started on the original Playstation, so I just feel something should be given to the PS3.

I mean, if Halo went multi platform, I'd be pissed about that too.

GTA started on PC, If anything PC should be pimped up and PS3 should be given sloppy seconds

Deverz said:
GTA started on PC, If anything PC should be pimped up and PS3 should be given sloppy seconds
Click to expand...

Well, I should say, GTA was known as a "Playstation Game" and thrived on it, like "Metal Gear", even though it started out on Nintendo, so I hoped that got the PS3 version some brownie points.