Is Dragonball AF a fake?

:laff:, nice one. But yea, it is a fake. A lot of people say it is real, but i have never seen it myself (even i searched for a while ago). But found ust some drawings, and fake pictures.

www.dragonballaf.euro.st>>>>>They say that this is the official site of DBAF.And i found a video too, Named DBAF Opening Video.

I've just looked at the website. And it's damn funny, all those funny episode names such as "Bulma dressed up like a hooker". Now i know for sure all the episodes are a "fake".. Opening movie / clips or not, it is still not official. Which means it is a fake in my opinion.

Did it strike you odd that the "official page" was packed with banner ads and search bars?

Did it strike you odd that the "official page" was packed with banner ads and search bars?
Click to expand...

Since as said above, that the AF has been made by 2 Fan guys. I wouldn't be suprised at all honestly.

I find those "screenshots" hilarious.

The Veget SSJ3 pic is edited from movie 6

And others can be found to XD

Q: Didn't Akira clearly state that AF is fake?<!--end heading_2-->
<!--begin text_2-->Yes, but shortly after, the wrighter of AF signed a contract with Akira allowing him to use some of her characters and create the new series. The contract is now viewable on the "What's New" page

I thought Akira Toryama was a guy O.O

I'm going to be very blunt and possibly very mean.

Anyone who thinks AF is real because a random website SAYS they're the "official" AF site needs to grow some common sense.

1) As stated, the site is obviously fake. For such an "official" site, it looks like a 15 year old Angelfire site. You ever see professional businesses with website do that? I sure haven't.

2) Whatever opening you saw was also fake. I've seen it. It's amateur editing and artwork that is a sorry attempt to mimic AT's art. It's fake.

3) SSJ5 goes too far as it is, but reading some of their laughable episode summaries, apparently there's a SSJ8 now where Goku becomes a giant like oozaru, but doesn't look like an oozaru. It's sad.

4) The episodes themselves are unrealistic and laughable. It's all a bunch of fanfiction passed off to be AF.

5) Have you seen their "forums?" No official company would use craptacular ProBoards as their official forums. Also in the links section is a link to someone's personal page, complete with bad grammar, l337 speak, and a lot of other amateur goodness.

AF means Annoying Fanboyism. In other words, some 15 year olds obsessed with DBZ got together, started the AF rumor, and is tricking DBZ newbies into thinking their crap is actually real.

Anyone fooled by this hoax needs to be slapped in the face by the iron hand of reality.

Anyone fooled by this hoax needs to be slapped in the face by the iron hand of reality.
Click to expand...

I thought AF was real when i first heard about it. Didn't knew really much of the dragonball series, so i went searching for it. All i could find is just simple AF images, which i knew that were edited. The names are a total stupid, images needs way more improvements, and hell. i wouldn't even watch AF even if it was real

FF|Skyrider said:
I thought AF was real when i first heard about it. Didn't knew really much of the dragonball series, so i went searching for it. All i could find is just simple AF images, which i knew that were edited. The names are a total stupid, images needs way more improvements, and hell. i wouldn't even watch AF even if it was real
Click to expand...

Well considering their "OFFICIAL" Box-set of the first series looks like this: 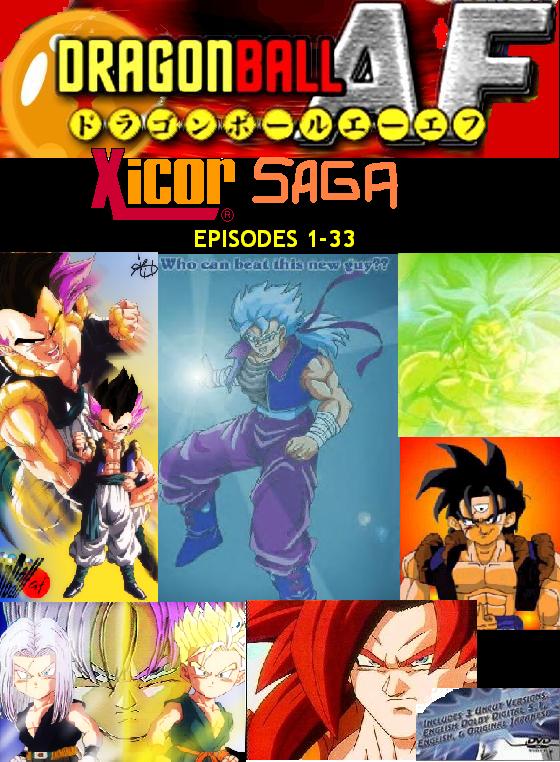 I don't blame you for not wanting to watch it. I mean look at the poor work here. Stolen pics from DBZ and GT slapped on there, fan-art thrown in there, and even "Saga" is painted on using a horrible MSPaint job.

And they're STILL acting like they're real. And some people STILL believe them!


Oh. And I thought "Who can beat this new guy" was a nice touch........pfffffffHAHAHAHAHAAAA!!!

AF really means April Fools. It was a joke, and a lot of people fell for it.

Yes it is true AF is just a fake.I saw a lot of pics from dbz or gt painted to look like there was any ssj5, or a fusion of gogeta and vegito called gogito. and some gotenks picture with potara and pink hair. This is just too much if they think people can be fooled like this. I have to say that i first believed it when i saw the video but now seems clear that is nothing but a fake.

I was serious. It was announced on April Fool's day.

Coolest thing ever.... Nappa going Super Saiyan. i loved that episode sooo much. You have to pay attention too because only his eyebrows go yellow. He pwns the crap out of pan too!
You must log in or register to reply here.